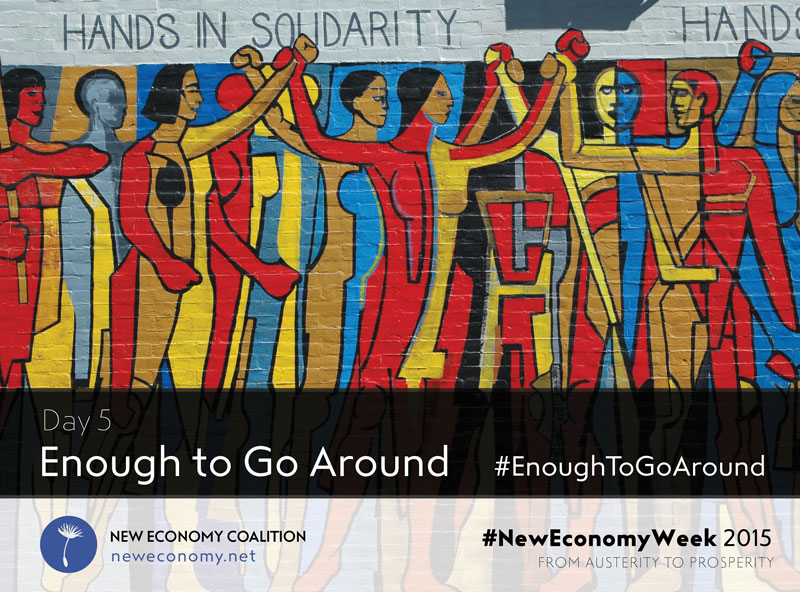 While the one percent tries to convince us that we’re broke and that privatization is the only solution, the rest of us know that’s not true.

Even on a finite planet, there’s enough to go around.

All around the world, people are uniting behind a vision of a new economy where all people’s basic needs are met...and then some. Public healthcare. Shorter work weeks. Healthy food. Clean water. Free education. We must imagine and create a future where capital (wealth and the means of creating it) is a tool of the people, not the other way around.

This future is bursting forth through the cracks of the current system as people experiment with new forms of business, governance, and culture that give life to the claim that another world is possible.

On the last day of #NewEconomyWeek, we ask, “How can we claim access and control over what we need to live full and prosperous lives?” #NewEconomyWeek #EnoughToGoAround

Today, as with each day this week, we will be featuring original content across the internet by NEC members and allies. See below for a breakdown of what you can expect to see today.

“After Decades in a Food Desert, These Neighbors Are Building a $2 Million Co-op—And They Own It” by Liz Pleasant (YES! Magazine)

“10 Reasons to Leave Your Company to Workers When You Retire” by Rob Brown of the Cooperative Development Institute (YES! Magazine)

“As Boomers Retire, Millions of Small Businesses Will Change Hands. Can We Keep Them Local?” by Alison Lingane of Project Equity (YES! Magazine)

“The Economics of Compassion: Can This City Wipe Out Debt by 2019?” an interview with Walter Brueggemann by Sarah van Gelder (YES! Magazine)

“The USDA Is Putting $34.3 Million Into Local Food Projects. Will It Be Enough?” by Leah Penniman (YES! Magazine)

“The Rebel Alliance and Empire Economics” by Ben Wolcott (Buzzfeed)

“Putting Divested Money To Work, Repairing the Damage” by Marnie Thompson of the Fund for Democratic Communities (The Leap)

“Will the Paris Climate Talk Deliver the World We Need? Not Likely” by Janet Redman of the Institute for Policy Studies (Foreign Policy in Focus)

“Democratic Banking for the 99%: Public Banks Stop Wall Street from Gambling with our Money” by Matt Stannard of Commonomics USA

“To Invest in a New Economy, Cut the Old Economy Pentagon” by Lindsay Koshgarian of the National Priorities Project

“Measuring What Matters: Beyond GDP, Towards Genuine Progress” by Cylvia Hayes

“This Changes Everything” Screenings

This Changes Everything is an epic attempt to re-imagine the vast challenge of climate change. Directed by Avi Lewis, and inspired by Naomi Klein’s international non-fiction bestseller This Changes Everything: Capitalism vs. The Climate, the film presents seven powerful portraits of communities on the front lines, from Montana’s Powder River Basin to the Alberta Tar Sands, from the coast of South India to Beijing and beyond.

Throughout the film, Klein builds to her most controversial and exciting idea: that we can seize the existential crisis of climate change to transform our failed economic system into something radically better.

There will be free screenings of “This Changes Everything” tonight in Medford, MA, University City, MO, Bend, OR, and Swarthmore, PA. 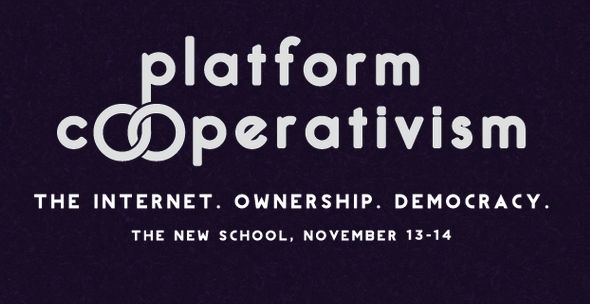 Cincinnati, OH: Union Cooperative Symposium, organized by 1Worker1Vote. Learn about the union co-op model from people doing it first-hand, including representatives of the Mondragon Cooperative in Spain.

San Francisco, CA: Basic Income Createathon, hosted by the Universal Income Project. Writers, artists, videographers, developers, musicians, and others will come together to create content and media around the theme of a Universal Basic Income in the United States. The more creative and powerful material we produce, the easier it will be to spread awareness and convince people of the importance of this idea.